“Let us confess the obvious: we live either unto ourselves or unto God; either we lose our lives, crucified together with Christ, or we cling wretchedly, connected to the world.” – Anna Maria van Schurman 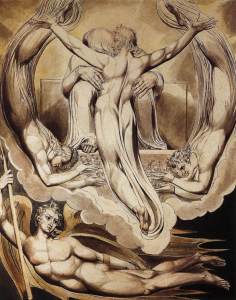 The Bible seems to be pretty clear when it comes to self denial. Jesus said it bluntly: “Whoever wants to be my disciple must deny themselves and take up their cross and follow me. For whoever wants to save their life will lose it, but whoever loses their life for me will find it.” (Matthew 16:24-25) Then Paul hammered home the message: “I have been crucified with Christ and I no longer live.” (Galatians 2:20) Yet the “good news” preached in most churches is about how God is out to enrich our lives, not take them away. In Sacrifice and Delight (2014), Bo Karen Lee resurrects the thought of two seventeenth century mystics to remind us that “self-denial, or more appropriately, self-surrender toward God was not only the path to finding one’s true self but also the secret to the deepest enjoyment possible in God.” The book itself is frustrating to read because it gives the reader almost no context about seventeenth century religion, and omits crucial information about the biographies of its two heroines. But Lee’s saving grace is that by writing such an ahistorical book, she forces us to engage with the theological idea of self-denial as a direct challenge to our comfortable Christianity rather than as an erudite exercise in historical reconstruction.

Anna Maria van Shurman (1607-1678) was an extremely gifted lady. She could read and write fourteen languages, was a painter, poet, theologian, and scholar. She also made history as the first female student ever to study at the University of Utrech. Contemporaries called her a “marvel of nature,” and Lee describes her as “the pride of Europe.” All this changed rapidly when she became a devoted follower of Jean de Labadie (1610-1674), a former Jesuit who joined and was then thrown out of the Dutch Reformed Church because of his pietist views. Friends said that she had “gone mad,” and she wrote that “it is now evident to all from the public writings of a number of celebrated men, who used to be extraordinarily well-disposed towards me, that my new manner of life displeases them greatly.” Much more capable intellectually than de Labadie, van Schurman became the most prominent spokesperson for the Labadist movement and for pietist groups more generally.

By all accounts van Schurman was not upset about her lost fame. She wrote to a friend that “sincere denial of one’s own self and of all things is not a small thing; without which nevertheless there is no Christianity except one that is counterfeit. Van Schurman said that all her learning had brought her no closer to God, but that “there is need of tongues of fire, a certain violent wind, to overthrow the lofty things of the world; more precisely, there is need of the creative power of the omnipotent, in order that the dead and dreaming be stirred up, those living for themselves be destroyed and new creatures brought forth.” Denying oneself to the point of giving up one’s own will is a frequent theme in van Schurman’s writings. “Whereas I was previously tormented by various desires,” she wrote, “both to know and to do many things, so that I thought I should never have rest anywhere, I now desire to know nothing more than what God wishes to reveal to me by his word and Spirit and divine Providence; I desire neither to be, to possess, nor to do anything except what this same Providence declares it wants by its own unceasing action.” 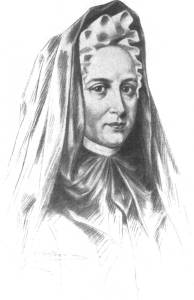 Several decades later the French mystic Jeanne Guyon (1648-1717) expressed many of the same ideas in more extreme language. She too was shunned for her teachings, and spent years in prison on heresy charges. Also like van Schurman, Madame Guyon’s writings have inspired generations of Christians and she is considered one of the key figures of Quietism. In her Commentary on the Song of Songs, Guyon compared the spiritual life to a wedding in which the bridegroom calls His bride to come and die: “The Bridegroom here calls her by the name of Spouse, and invites her to hasten in permitting herself to be destroyed and annihilated, and receive the spiritual marriage.” Lee notes that a lot of Guyon’s language is shocking, and her God seems to be a cruel master who takes no joy in His creation except in violently destroying it. She is in good company here, and many of Guyon’s contemporaries were also shocked by the violence of her teachings, which demanded that Christians suffer and abolish their sense of self in order to achieve union with God. She taught, “So the soul, when it has arrived at its center, may be said to behold itself no longer – though, in fact, it has a mode of perception appropriate to its state. When, however, it passes beyond itself, it no longer feels nor perceives itself. The further it advances in God, the less it discovers itself, until at last, wholly lost in the abyss of God, it no longer feels, knows, nor discerns anything but him.” 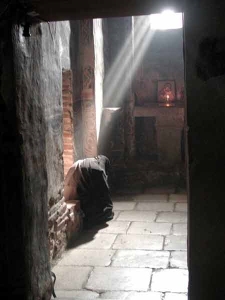 But as Lee also points out, abandoning the self is also a promise of infinite joy. Guyon wrote, “here the soul must no longer and can no longer make the distinction between god and herself. God is she and she is God, since, by the consummation of the marriage, she is flowing back to god and finds herself lost in him, without being able to distinguish or find herself again.” This is absolute bliss and it is only by losing ourselves that we can truly reach our full potential. Once the bride “is lost in God, it becomes a fishpool, a source of every blessing and a remedy for every ill. God employs her mind, which has been willingly given up for his sake, in a thousand great undertakings that are useful for the good of her neighbor.” Always the theologian, Lee is deeply concerned about what twenty-first century Christians can learn from these mystics. Putting their ideas into a vocabulary that is more familiar to us, she concludes that “The purpose of self-denial or self-annihilation for van Schurman and Guyon is to create more room for God’s presence in one’s life. Letting go of one’s own agenda opens up space for God’s Spirit to work, to lead, and to create the individual anew. This surrender is at times painful, as one clutches to the things that one cherishes. Releasing one’s loves, however, only allows the Divine Lover to offer new graces in the place of less loves previously grasped.”

I am grateful to Catholic Library World for providing me with a review copy of this book.