I wrote a lot of nasty things about Father Dumitru Stãniloae (1903-1993) before deciding to translate The Holy Trinity: In the Beginning there was Love (1993). He was one of the foremost Orthodox theologians of the twentieth century and as such it is important to critically engage with him rather than just praising his brilliance. I pointed out that in his younger days he had defended fascists and that he originally crafted his mystical understanding of personhood because it fit with the extremist nationalism of the 1930s and 1940s. In another forthcoming article I argue that this same mysticism promotes a dangerously nationalist ecclesiology and makes ecumenical communion with other Christians difficult. But this does not mean that there are not moments of incredible beauty and insight in Stãniloae’s writings. After dedicating three decades to intense theological study Stãniloae was thrown into the harsh conditions of communist prisons, where he learned to pray with his heart rather than his head. Unlike many of his fellow inmates, Stãniloae never spoke about his prison experiences but his profound encounters with God there permeate his later writings. The Holy Trinity is the last book that Stãniloae wrote before his death and it synthesizes his writings on the Trinity from the 1970s on. 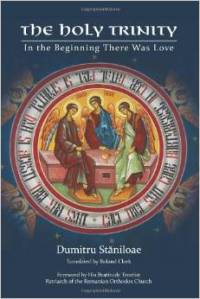 The initial chapters of The Holy Trinity are disappointing at first. He seems to be trying to prove from first principles that the Trinity is a logical necessity. His approach is scholastic and would be completely unconvincing to someone who does not already believe in the Trinity. But as I spent more time with the text I became convinced that what Stãniloae wanted to prove here was not that any logical person must become a trinitarian but that the Trinity can be explained in logical terms. Orthodox theologians like Vladimir Lossky (1903-1958) have emphasized that God is so mysterious that we cannot describe Him using our words and logical categories. In contrast, Stãniloae insists that even though God is a mystery we can still understand Him a little bit – that’s why we have words and logic to begin with.

Stãniloae’s approach to the Trinity becomes moving and incredibly beautiful as the book progresses. He argues that the Trinity emerges through the movement of God the Father loving His word in the Son, through the Holy Spirit; the Son returns that love, also through the Holy Spirit, and draws us into this loving dialogue by being made in human likeness. In Stãniloae’s words, “The Spirit represents God’s turning towards himself; the regathering of his existence in personal communion.” He goes on, “The Spirit does not proceed from the Father as an end in himself, but the Spirit constitutes a loving tie formed between the Father and the Son. The Spirit is sent towards the Son as a person who loves him just as the Father does, so as to be a person who loves the Son together with the Father. We see this when we say that the Spirit, proceeding from the Father, ‘rests in the Son, shining from the Son.’ Through this shining, the Spirit reveals the Father to the Son and the Son to the Father.” Elaborating on Martin Buber’s description of I-Thou relationships, Stãniloae suggests that we can and do love one another just as the Father loves the Son: “The Father does not distance himself from the Son and the Holy Spirit, and they do not think about separating themselves from the Father. Rather, each sees himself in the other and is more preoccupied with the other’s good than with his own. This is what love feels like when it unites people without confusing one person with another. Valuing the other more than yourself, you do not focus on what separates you from each other.”

This was my second attempt at translation. My first, a book on Christian leadership and abuse of power in churches, lies unpublished collecting dust in a drawer. The challenge then lay in rendering the author’s poetic flights of fancy accurately while retaining the beauty of the original language. Stãniloae’s The Holy Trinity was an entirely different challenge. Here the language had to be precise, and paying attention to how Stãniloae used Greek words was crucial.This project made me see theological language in a whole new light. Even in Romanian, Stãniloae is hard to read. His sentences are convoluted, and are full of subordinate clauses and logical digressions. One specialist once speculated to me that when Stãniloae wrote in Romanian he was translating out of German or Greek in his head. I am sure he was right. I wrestled for weeks over the difference between “essence” and “being,” constantly hoping that Stãniloae was being consistent in distinguishing between them. I almost went insane when he began a play on the word “patimã” to make it mean both “passion” (in the patristic sense) and “suffering.” Even though he draws heavily on the Church Fathers and single-handedly translated the Philokalia into Romanian, Stãniloae’s Greek is not that good. I don’t read Greek at all so I relied on English, French, or German translations instead of translating Stãniloae’s Romanian renderings of Greek texts. His translations from both Greek and German are sloppy and in one case I caught him quoting approvingly a phrase from St. Athanasius when in fact Athanasius himself had been quoting a heretical source here in order to refute it. By accident, Stãniloae was quoting heretics as if they were Church Fathers!

These sorts of mistakes are the product of having lived for years in a communist state that marginalized theologians and limited Stãniloae’s ability to dialogue with his intellectual peers abroad. Trapped by his environment, Stãniloae dismisses Protestant and Catholic thinkers unfairly. He quotes selectively from their writings and often clearly doesn’t understand the larger points they were making. My purpose in translating what I think is one of his best and most accessible works is to help overcome that barrier. Orthodox thinkers have amazing insights to offer the Christian world. Their spirituality is rich and they are not stuck inside many of the endless quarrels that plague Western theology. But most Westerners don’t read the languages of Orthodoxy and without good translators those riches are being wasted. For their part, Orthodox theologians desperately need to interact with specialists from other traditions if they want to improve their work. They must hear the criticisms of Western writers and learn from the West’s rich traditions of Biblical criticism and systematic theology.

Confessional squabbles aside, a deep longing for God’s presence lies at the heart of this book, and is expressed the series of eloquent and highly-theological prayers to the Holy Spirit that conclude The Holy Trinity. The first of these, an Invocation by Simeon the New Theologian, says, “Come, for my wretched soul has ever longed and ever longs for you. Come, Alone to the alone, for as you see I am alone: you have separated me from all things and made me to be alone upon the earth. Come, for you are yourself the desire that is within me, and you have caused me to long after you, the wholly inaccessible. Come, my breath and my life. Come, the consolation of my humble soul. Come, my joy, my glory, my endless delight. I give you thanks, for you have become one with me, in a union without confusion. Unchanging and unaltered, God over all, you have yet become all in all to me: food inexplicable, freely bestowed, ever nourishing my soul; a fountain springing up within my heart, a garment of light consuming the demons, purification that washes me clean through the immortal and holy tears that are granted at your coming to all whom you visit. I give you thanks, for to me you are a light that knows no evening, a sun that never sets.”