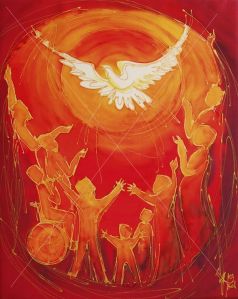 Some of the best years of my life have been spent in charismatic churches. I have been encouraged by people prophesying over me; I have been startled to discover that I had supernatural insights (words of knowledge) when praying for people; and I feel like I can express my heart to God more easily when I pray in tongues. But still, every time I hear someone prophesy or lay hands on people I feel wary. All of these things are great and useful and should be cherished, but they are also abused far too often. Vague positive thinking and manipulative theatrics make even charismatics uncomfortable, which is why discerning pastors and elders are so crucial for these churches. Compounding the problem is that not enough serious theologians have taken the time to try and understand what the Bible means when it talks about the Holy Spirit. One of the few people who has is Gordon Fee. An Assemblies of God pastor, professor of New Testament Studies at Regent College, and senior editor of the NICNT commentaries for many years,  Fee is able to speak pastorally, academically, and experientially about the Holy Spirit. In Gods’ Empowering Presence (1994) he approaches the question from an academic’s perspective, which is rare and refreshing.

Coming to terms with the Holy Spirit is absolutely crucial for understanding Paul. In the words of A. Neill and N.T. Wright, “Paul’s doctrine of the Holy Spirit is far more central and characteristic than his doctrine of justification by faith.” But because Paul doesn’t address things systematically in his letters most of the time we’re stuck using our own experiences to understand Paul’s pneumatology. When Paul talked about speaking in tongues, for example, did that look the same as what we see in charismatic churches today? Did NT prophets predict concrete future events like the OT prophets did, or was prophecy about encouraging and rebuking? Fee draws on his numerous commentaries on Paul’s letters (including his acclaimed work on 1 Corinthians) and uses his specialist expertise to address major debates about things like baptism in the Holy Spirit, the spirit/flesh dichotomy in Paul, and what it means to have spiritual gifts.  Here are a few things that struck me as I read it: 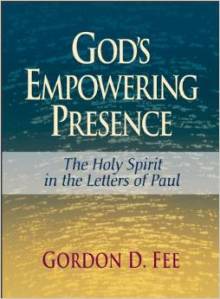 1) This is not a good book to read in bed. It weighs 3 lbs (1.4 kg). At 967 pages, it’s a workout just to pick it up. 759 of those pages are detailed, line-by-line commentary of every passage Fee can find which might possibly, maybe, refer to the Holy Spirit. Based on Fee’s own translation, which is designed to aid his commentary, not to be easy to read. His discussions are fascinating, but much of it reproduces interpretations that are already in his commentaries on these books. It’s just too much to read all the way through but great as a reference tool. I am not ashamed to admit that I gave up before the end. The commentary sets up his 100+ pages of conclusions, however, which are gold.

2) The Bible wasn’t written as a theological tract. This means that most of the things we are really interested in knowing about were presuppositions for Paul, who was writing to address concrete issues in these churches. Sounds simple, but it’s a big idea. We want to know why we still wrestle with sin even though we’re saved, or how children who grow up in the church become Christians. Paul isn’t interested in such questions so the Bible doesn’t tell us the answers. Learn to live with not knowing, Fee says. Along the same lines, Fee assumes that the letters to the Corinthians were part of a two-way correspondence and that when Paul talks about “spiritual wisdom” he is actually using a term popular in Corinth sarcastically and doesn’t necessarily think that some people are more spiritual than others. Makes for some tricky and very interesting exegesis.

3) Unlike most Pentecostals, Fee argues that baptism in the Holy Spirit happens at conversion.  Conversion is what the Spirit does, and water baptism is the believer’s response to it. Miracles, speaking in tongues and prophecies were so normal in Paul’s experience of Christianity that he can’t imagine how anyone could be converted without them. But Fee points out that what the Spirit does in conversion is actually much more profound than magic tricks and says that such “fluff” is irrelevant compared to the work of regeneration that is taking place. Moreover, Paul thinks about both salvation and ethics in eschatological terms, as the destiny of God’s people as a whole, and not as something that happens at an individual level.

4) Life in the flesh and life in the Spirit are eschatological states, not anthropological ones. So Paul isn’t saying that my material body is at war with my soul, but that my earthly existence (life in the flesh), corrupted as it has been by sin, has been overwhelmed by my life in Christ (life in the Spirit). Not only does this not make Paul look like a dualist, it helps us focus our eyes on the prize that is now, but not yet. This ambiguity is what makes the Holy Spirit so important for Paul: “On the one hand, the coming of the Spirit fulfilled the OT eschatological promises, and was the sure evidence that the future had already been set in motion; on the other hand, since the final expression of the Eschaton had not yet taken place, the Spirit also served as the sure guarantee of the final glory.” Life in the Spirit now is what guarantees life in the Spirit after the death of our bodies. 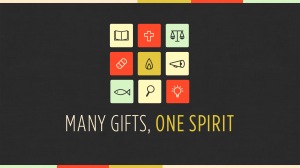 5) Spiritual gifts are communal, not individual. Gifts are given to communities for the edification of everyone, and they are so diverse that none of Paul’s lists are comprehensive. They exist both for worship and for ethical corporate life. Miracles are not supposed to prove anything – the resurrection did that. They are just there to help us. Paul also thinks that they are normal: “He was born and raised within a tradition that believed in God and could not even have imagined God as not being all-powerful. With their thoroughly non-deistic view of God as one who took an active interest in his universe and in the affairs of his people, it would never have occurred to them that the one who chose to be present with them in the Incarnation and now by his Spirit would do otherwise than graciously intervene in their lives.”

To conclude, let me quote Fee at length as he wrestles with what incorporating a Pauline pneumatology into our churches would look like:

“A genuine recapturing of the Pauline perspective will not isolate the Spirit in such a way that “Spiritual gifts” and “Spirit phenomenon” take pride of place in the church, resulting in churches which are either “charismatic” or otherwise. Rather, a genuine recapturing of the Pauline perspective will cause the church to be more vitally Trinitarian, not only in its theology, but in its life and Spirituality as well. This will mean not the exaltation of the Spirit, but the exaltation of God; and it will mean not focus on the Spirit as such, but on the Son, crucified and risen, Savior and Lord of all. Ethical life will be neither narrowly, individualistically conceived nor legalistically expressed, but will be joyously communal and decidedly over against the world’s present trinity of relativism, secularism, and materialism, with their thoroughly dehumanizing affects. And the proper Trinitarian aim of such ethics will be the Pauline one – to the glory of God, through being conformed to the image of the Son, by the empowering of the Spirit. In recapturing the dynamic life of the Spirit there will also be the renewal of the charismata, not for the sake of being charismatic, but for the building up of the people of God for their life together and in the world.”