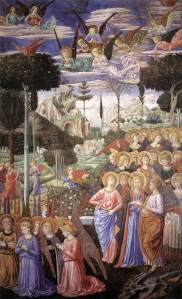 This is a book to be savored. Read quickly, it is an unsatisfying and cursory catalog of a seemingly random collection of writers, artists, and theologians talking about heaven. McGrath skips whole historical eras, giving especially short shrift to Late Antiquity and the Early Middle Ages and ignoring the non-Western world entirely; he struggles to force texts into thematic categories which sometimes leads to awkward interpretations such as when he puts Dante’s Paradiso in the middle of his analysis garden imagery; and his analyses of these texts rarely adds anything that would be new to specialists in these periods. Read slowly, A Brief History of Heaven (2003) is a rich and beautiful tapestry of visions of glory that have encouraged and inspired Christians throughout the ages. McGrath argues that imagery is often shapes spirituality much more profoundly than carefully thought-out ideas do, and this book explores key pictures that Christians have used to describe heaven. McGrath weaves them in and out of one another to emphasize profound, and sometimes unexpected lessons. “To speak of paradise is not to hanker after a return to a specific physical place,” McGrath says, “but to yearn for the restoration of a specific spiritual state.” Heaven is about communion with God, and that happens far from the dry rigor of intellectual history. Instead, McGrath invites us to rest awhile alongside Christian writers and artists from other times and places as they search for the divine.

The book is divided into six chapters, each of which approaches heaven from a different angle: as a city or a garden, as a place made accessible only through the cross, an image of transcendence, consolation, and as the goal of the Christian life. As well as providing security and a place to settle down, McGrath reminds us, cities are communities. In the ancient world “cities were understood to be cohesive corporate entities, rather than aggregates of individuals,” he writes, which is why the city could serve as such a potent symbol of the Church. McGrath follows the idea of the heavenly city through the Biblical notion of the new Jerusalem to Augustine’s two cities, medieval visions of a heavenly citadel, through to the city as destination in the fourteenth century poem Pearl and in John Bunyan a few hundred years later. Along the way he covers ancient and medieval speculation about what our resurrected bodies will look like emphasizes how dreaming about heaven consistently provoked Christians to intensify their efforts at repentance and renewal. 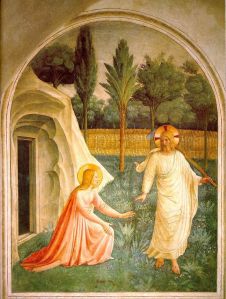 When he turns to heaven as a garden, McGrath moves from Ezekiel’s vision to the gardens of early modern English nobles which were modeled on John Milton’s description of the Garden of Eden in Paradise Lost (1667). The garden of Eden, that place where humans walked with God in perfect communion, has served as an image of paradise for centuries. It is no accident that when Fra Angelico painted Noli Me Tangere (pictured right) in 1425-30 he placed Mary Magdalene’s encounter with the resurrected Jesus in an enclosed garden. The communion of the garden paradise is now possible again because Jesus has conquered death and restored our broken relationship with God. In the writings of Irenaeus (130-200), McGrath tells us, “human innocence was lost in one garden (Eden), yet regained in another (Gethsemene). In Eden, the tree of life became a tree of death; in Gethsemane, a tree of death (the cross) became a tree of life.” 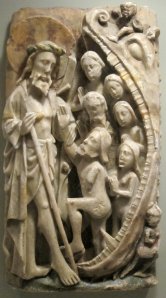 As the author of one of the most definitive intellectual histories of the doctrine of justification, McGrath is on very familiar territory when he tells us how Christ’s work of atonement opens the gates of heaven for us. Frustrated that he could not express the idea of reconciliation with God because the English language had no words for it, William Tyndale (1494-1536) invented “at-one-ment” to describe the state of redeemed humanity before God. Christ is thus the victor over death, the harrower of hell, and an epic hero. The old English poem The Dream of the Rood (c. 750) describes a beautiful and extended vision of “a wondrous tree spreading aloft spun about with light” – the cross. “At times,” the poet says, “it was soaked with wetness, drenched by the coursing of blood; at times adorned with treasure.” Jesus, in this poem is as much the hero as any of King Arthur’s knights: “The young man, who was almighty God, stripped himself, strong and unflinching. He climbed upon the despised gallows, courageous under the scrutiny of many, since he willed to redeem mankind. I quaked, then, when the man embraced me.” McGrath’s frequent pauses to dwell on little-known texts such as The Dream of the Rood is the great strength of the book. Rather than making us read these stories and poems for ourselves he lets us taste them briefly. But each morsel is so fleeting that one has to read this sort book a little at a time, cherishing each new image before moving on to the next, and allowing God to encourage us as we think on what He has prepared for us as our eternal rest.