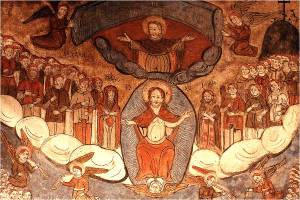 A prolific historian of rare erudition, John-Paul Himka stands out as the only person ever to completely trash one of my conference papers on the grounds that it was “wrong-headed” and just plain rubbish. He was right, of course. For which I was, and am, eternally grateful. In Last Judgement Iconography (2009), Himka applies his unfathomable discerning gaze to the history of icons scattered across the Carpathian mountains. Usually a specialist of religion, nationalism and violence in nineteenth and twentieth century Ukraine, Himka is far out of his comfort zone when he writes about religious art from the fifteenth to the seventeenth centuries, but you wouldn’t know it. Having spent nine years working on this project, Himka knows his sources like the back of his hand and is at home in a historiography that spans numerous languages. He discovered and cataloged many of the icons he discusses himself, driving through the region in a hired car or trekking across mountains to remote monasteries. 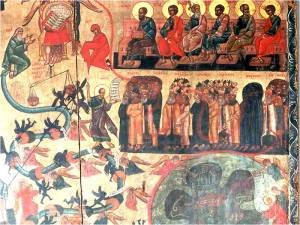 But Last Judgement Iconography is much more than a close reading of early modern icons portraying the last judgement. Himka explains that “what I was trying to do was to find a new way to write history.” The history of early modern Eastern Europe is frequently written through the perspective of modern nationalism, and nationalist historians project national identities back into the far distant past. Himka writes that his goal was to “explore some large complex of the past culture that had nothing to do with the nation and its objectives, something that had not been assimilated into the national narrative. I would explore it like a lost city, trying to deduce from its surviving artefacts what the culture was like that had produced it.” How difficult this was becomes clear in the conclusion, when Himka describes the numerous false paths that the existing historiography led him down. His preliminary research told him that last judgement icons first appeared in the region in 986, for example, but closer investigation revealed that the Carpathian icons first emerged as an artistic genre in the fifteenth century. The Ukrainian historiography had also taught him that the genre originated in Byzantium and traveled north via Halych and Kiev, whereas Himka’s evidence suggests that they actually originated in the region around Staryi Sambir and then spread over the next couple of hundred years along the crests of mountains and through river valleys – through whichever routes made travel least difficult. 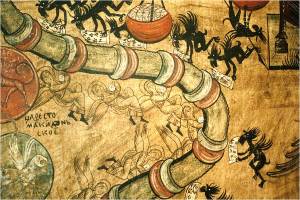 Although much of the book can be tedious for the non-specialist, Himka makes some fascinating discoveries. One of the most striking is the idea of celestial toll-booths, through which the soul must pass if it is to reach heaven. In the picture to the left you can see demons reading out the sins of the deceased, which the soul must pay for before being allowed to pass. Icon painters also portrayed non-believers who were doomed to judgement. To the right (below) you see a river of fire running through Poles, Germans, and Kalmyks, people for whom the painters had little sympathy. Sometimes the way that these peoples are pictured can be quite 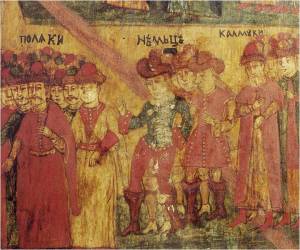 revealing. Himka notes one icon from the Przemysl region, for example, that shows Moses pointing a multitude of people to Christ. Most earlier icons portrayed Moses leading Jews, who were obviously destined for hell, but in this one the painter has copied the idea without really understanding it. Himka suggests that the painter did not realize that the people associated with Moses were supposed to go to hell, and so included a wide variety of people in the picture. At first these multitudes are defined primarily in religious terms, but over time national groupings become more and more common as the salience of national identities increased in the region. 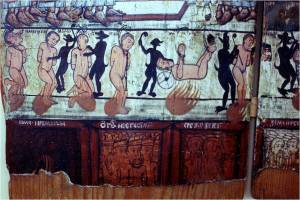 As manufacturing and trade evolved, so too did the sorts of people in hell and the punishments they endured. An icon from Dolyna (left), for example, shows blacksmiths and goldsmiths being tortured for stealing iron and gold from the peasants who had commissioned them to work with it. Once social tensions between rich and poor increased so too did the number of lords and ladies in hell. Made primarily for peasant audiences, these icons frequently portrayed merciless landlords being carted off to hell for abusing their serfs. People could go to hell for any number of reasons, from giving a bad confession, sleeping through church, adultery, or infanticide. Women who killed their babies, or even women who remained childless had snakes sucking the wasted milk from their breasts. Those guilty of fellatio were given demonic feces to suck on for all eternity.

Through a close analysis of these icons Himka does a superb job of recreating peasant religion and shows how social and economic changes impacted popular beliefs. He explains who the painters were, where they got their ideas from, and how locals probably treated these icons. Considering that he has almost no sources to work from apart from the icons themselves, this is no mean feat. Their world was so rich and their beliefs so unique that you don’t have to be a specialist in Ukrainian iconography to find this book interesting. At the very least, these pictures help to put our own ideas about the afterlife into perspective and show how historically contingent so many popular religious beliefs are. 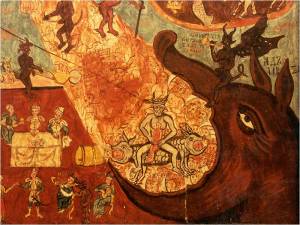