Besamim literally means spices. It is used for Havdalah services, which are the evening services held on the Sabbath. The besamim is passed around so everyone can smell it. It is meant to “wake” the participants from the relaxation of the Sabbath and prepare them for the week to come. Any naturally fragrant item can be used for the Havdalah service (no man-made items) and it has to be a pleasing smell; those are the only two ceremonial stipulations for besamim. It has become customary to use spices because they are the most convenient; they are compact and stay fragrant for a long period of time. Whole cloves, cinnamon, and whole allspice are the most common forms for besamim. Besamim sometimes has a special holder, or a regular bowl can be used. Besamim holders come in many different forms, but the most common is a tower, castle, or finial shape.
Source:
Dena. “Besamim Basics.” Chai and Home. Accessed October 21, 2015. http://www.chaiandhome.com/besamim-basics/

The etrog is a fruit that is commonly used for Sukkot, a pilgrimage festival that celebrates the final harvest and the Israelites wandering in the desert after they were given the Torah at Mt. Sinai. The incorporation of the lemon-like fruit into Sukkot is vital because it represents the heart of man due to its shape. Additionally, the etrog represents the model for what a Jewish person it to be like. The qualifications for being ideal include a comprehensive knowledge of the Torah and for completing good deeds, similar to the pleasant smell of the etrog. Another unique characteristic of the etrog is that it is often referred to as the forbidden fruit that was consumed in the Garden of Eden, which counters the Western world’s interpretation that the fruit was an apple. 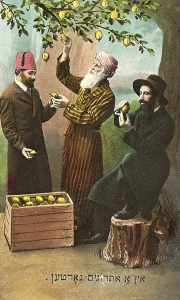 Bapperot are blessings Jews use for pleasant fragrances. For example, they have blessings over fragrant spices, known as the Besamim. They also have blessings over fragrant fruit, which is called Bapperot. The blessing is as follows, “Blessed art Thou, Lord our God, King of the universe, the One who gives pleasant fragrance to fruits.” However, there are limitations on when to say blessings over the fragrant fruit. One example is, Jewish people only have to bless the fruit if they purposefully pick it up to smell it and possibly eat it. If they happen to be walking by an apple tree/orchard, they are not mandated to say a blessing over it. 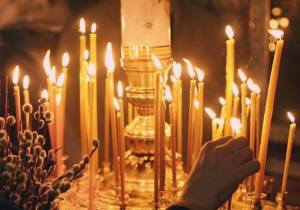 Upon entering an Eastern Orthodox Church, you can expect to find a plethora of lit candles. Candles in Orthodox churches are often made from pure beeswax in order to avoid soot or residues associated with paraffin based candles. Since the candles are derived from the pollen of flowers collected by bees, they often give off a sweet burning scent when lit. Orthodox churches use candles to signify messages within various chants, such as “Glory to God who has shown forth the light…” While candles may represent a variety of spiritual beliefs in Eastern Orthodoxy, they often are used to symbolize God’s light illuminating the darkness, or Christ’s light shining before mankind.

Source: John Sanidopolous, “The Use of Candles in the Orthodox Church,” Mystagogy. Accessed October 22, 2015. http://www.johnsanidopoulos.com/2010/02/use-of-candles-in-orthodox-church.html 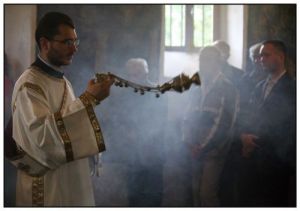 Frankincense is dried sap harvested from a special family of trees that grows at the southern end of the Arabian Peninsula and is used for a variety of reasons, including incense. In order to release the scent of Frankincense it is either burned or smoldered over hot coals. Few people know about frankincense or its uses other than the Biblical story of how it was given as a present to Christ at his birth from one of the Three Wise Men. It is used in burial rituals for embalming, an offering to the dead, and in order to cover the odor of the body. After the Catholic and Orthodox churches became more institutionalized it became an important part of their services still practiced today.
Sources: Neil Richardson and Marcia Dorr, “The Story of Frankincense,” Middle East Institute, Accessed October 22, 2015. http://www.mei.edu/sqcc/frankincense

If you cut the bark of a Boswellia or Commiphora tree a gummy sap will ooze out which can then be used in a dried form or it can be steamed into an oil; this is myrrh. Myrrh, when burned, gives off a piney, bitter odor that is the opposite of the scent frankincense gives off when burned. In the Orthodox Church, Holy Myrrh is used in the Sacrament of Confirmation. It is prepared from oil and other essences to symbolize the gifts received by the Holy Spirit upon confirmation. Sources of the use of myrrh date as far back as the 8th century. Around every ten years when the supply of Holy Myrrh nears depletion, a formal request of participation to other Orthodox Churches is sent asking for a specific ingredient of the myrrh.

Eastern Orthodox saints are recognized as saints if their dead bodies do not decay or decompose like a normal person, but are incorruptible. When saints are buried they are supposed to smell like flowers and incense. The bodies are enshrined and displayed for worshipers and pilgrims to venerate. Another characteristic of a saint’s dead body was “a persistent pleasant fragrance emanating from the body.”
Sources: “Incorrupt Bodies of Saints,” All Saints and Martyrs. Accessed October 22, 2015. http://saintscatholic.blogspot.com/p/incorrupt.html

“Is it true that the bodies of some saints are incorruptible?” Got Questions? Accessed October 22, 2015. http://www.gotquestions.org/incorruptible-saints.html

Robert Bartlett, Why Can the Dead Do Such Great Things?: Saints and Worshippers from the Martyrs to the Reformation. Princeton, NJ: Princeton University Press, 2013.

Holy water is a critical part of Eastern Orthodoxy. Eastern Orthodox Christians believe that the Holy Spirit comes down into the water and changes the water’s natural properties. The water becomes transparent and will not spoil. The water can be used to heal, to driving away evil, or to preserve people and their homes from harm. Many orthodox believers drink the water to bless themselves on a daily basis. It is believed that Holy Water will strengthen your soul. Demter Fragrance Library released a perfume that is called Holy Water. The specific details of the perfume are, “We actually have good memories of church. The porcelain font, ozone scented water, oak scented pew – all mingled. Lovely, we think. To capture this scent, imagine an old European church, in a small town off the beaten track. This is the scent of the blessed water you might find there in an old stone container.” 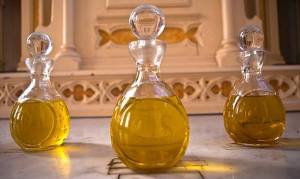 Holy Oil, or Holy Chrism, is prepared from olive oil and various spices. The spices used include cinnamon, sweet cane, cassia and myrrh to perfume the oil. It is used during Baptism and Chrismation and to consecrate churches, altars, utensils, and other holy objects within the church. The purpose of the Chrism is to transmit the gift of the Holy Spirit to the new member of the Church through Baptism. In the early stages of Christianity, the Chrism was sanctified by the Apostles; as the religion spread, the practice was passed down to bishops in order to prepare the Chrism during Holy Week, and later passed to the Patriarchs of the Church.
Source: Menevisoglou, Pavlos. “The Sanctification of the Holy Chrism.” The Greek Orthodox Archdiocese of America. Accessed 23 Oct. 2015. http://www.goarch.org/ourfaith/ourfaith8420.

Many wooden churches can be found in Poland, Slovakia, and the Ukraine. Using wood as the building material creates a natural scent to the enclosure that a brick and mortar building can not compete with. The resigns and oils slowly permeate the interior atmosphere granting an almost surreal, open, otherworldly feel to the space. The woods used are for the most part native to the region. As the similar scents of the forest and the interior of the church intermingle and become one, the essence of the spiritual, the idea of the holy reaches beyond the confines of the church and soars into a new realm; the wide open space of the living world. By bringing a sense of holiness beyond the walls of the spiritual structure and into the mundane world, religion and the word of God is allowed the freedom to fly on the winds and be associated with the smell wherever that scent is encountered, not just in the confines of the churches environs.
Source: Franz Bauer, “Wooden Churches in Slovakia,” PBase. Accessed October 23, 2015.  http://www.pbase.com/bauer/wooden_churches_slovakia

Aside from being one of the most popular alcoholic beverages in Europe wine is also a significant piece of any Christian religion. In the Protestant, Catholic and Orthodox religions wine is mentioned consistently in the Bible and is significant to Christians because of its connection to Jesus’s blood. During the Last Supper Jesus told his disciples that the wine they were given was his true blood and that the bread they were given was his true body. Today wine and bread are still used as the blood and body of Christ while preforming Eucharist. The Eucharist is considered one of the most sacred sacraments in the Christian religion, so the wine used for it is very important to Christians as well.
Sources: “Eucharist,” Orthodox Wiki. Accessed October 23, 2015. http://orthodoxwiki.org/Eucharist

“Only Museum of Church Wine in World to Open in Zvenigorod,” Voices from Russia. Accessed October 23, 2015. https://02varvara.wordpress.com/2007/12/10/only-museum-of-church-wine-in-world-to-open-in-zvenigorod/ 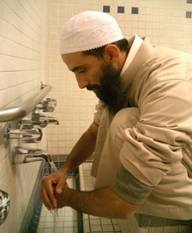 Purity, known as Taharah, is a major component in the Islamic faith. It is important to observe the cleanliness of one’s clothes, one’s soul, and one’s surroundings. Wudu is the process of washing the body with water before engaging in prayer or handling the Quran. Wudu involves half-ablution (ablution meaning washing, one’s self), whereas Gusl involves full-ablution. Gusl is the process of washing your body entirely. Full-ablution is required after an adult muslim loses their bodily state of cleanliness, and should be engaged in after a number of different circumstances, such as: sexual intercourse, sexual discharge, after a woman completes her period, after someone dies of natural causes and after giving birth. Muslims are taught that being clean draws you closer to Allah, and therefore they must smell good all the time.

Ittar is a natural perfume which is considered important to followers of Islam. The perfume is derived from all-natural oils from sources like flowers, plants and wood. Ittar is highly concentrated and free of chemicals. Muslims consider ittar one of the most treasured possessions, even comparing it to the importance of Muhammed. A common belief is that ittar will ward off dark spirits and assist Muslims on their spiritual journeys.

Mosques do not have an inherent smell which is created intentionally by incense or any other means. However, mosques commonly smell strongly of feet. Worshipers are expected to remove their shoes during services, and they pray on small rugs, which retain the smell well. The smell, while unpleasant to infrequent visitors, is familiar and common throughout the world’s mosques, and thus has significance to Islamic followers.
Sources: “Why do Mosques smell like sweaty feet?” Topix. Accessed October 23, 2015. http://www.topix.com/forum/religion/islam/TGGJLFR09NTAU7PO3