Muslims aren’t the only people who talk about holy wars and religious crusades. Philip Jenkins’ big point in The Great and Holy War is that “not just incidentally but repeatedly and centrally, official statements and propaganda declare that the war is being fought for God’s cause, or for his glory, and such claims pervade the media and organs of popular culture. Moreover, they identify the state and its armed forces as agents or implements of God. Advancing the nation’s cause and interests is indistinguishable from promoting and defending God’s cause or (in a Christian context) of bringing in his kingdom on earth.” Of course every combatant had other war aims as well, but so did the medieval crusaders and so do ISIS. Jenkins proves this part of his argument convincingly, bringing  example after example of people claiming that the war was about doing God’s will. Sometimes his evidence is exaggerated or taken out of context – such as his failure to discuss the crusading imagery in D. W. Griffith’s film The Birth of a Nation (1915) within the context of Thomas Dixon’s attempt to revive the Klu Klux Klan, but it is nonetheless incontestable that a crazy number of Christians found religious meanings in the First World War.

A preacher in Bremen explained the display of unity that the declaration of war had apparently stirred up in the German people by arguing that “the spirit of God came upon us. It was a New Pentecost. A great roar came from heaven. Didn’t we hear the divine words?” Another Lutheran pastor in Germany preached: “World War, you transfigure our nature, like the Word and the Spirit. … Come, Sword, you are to me the Revelation of the Spirit,” and Franz Rendtorff, a professor in Leipzig prayed “Bless this war, if it brings to our people the religious uplifting which makes us unconquerable!” Across the English Channel the Anglican bishop of London, Arthur F. Winnington-Ingram, told his listeners in a Sunday sermon to “kill Germans – do kill them; not for the sake of killing, but to save the world. … As I have said a thousand times, I look upon it as a war for purity, I look upon everyone who died in it as a martyr.” The British Prime Minister called him “an intensely silly bishop.” Even though it exploited religious rhetoric in its propaganda, the British government was careful about presenting the war as a religious crusade because it didn’t want to upset its allies in the Middle East. Even though General Allenby was careful to enter Jerusalem on foot and without ostentation when he conquered it, he nonetheless referred to his victory at Megiddo as “the Field of Armageddon”, his secretary likened the conquest of Jerusalem to the crusades of Richard the Lionheart and American propaganda compared it to the Maccabean revolt of the second century BCE. 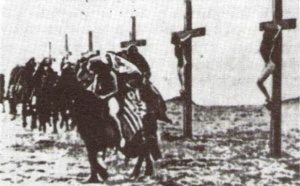 Religious rhetoric dominated wartime propaganda and writing across the world, although Jenkins is much better when he deals with Western Europe. His discussions of Eastern Europe are cursory, and his treatment of the Russian Empire frequently misrepresents what actually happened. When he turns to the Middle East, Jenkins claims that “the war created the Islamic world as we know it today. … The resulting postwar search for new sources of authority led to the creation or revival of virtually all the Islamic movements that we know in the modern world.” What he doesn’t tell us is the long history of each of these movements. Instead, he launches into a standard intellectual history of pan-Islamism then claims that it was stirred up by Islamic fears that Western Christians – especially the British – were launching an anti-Muslim crusade in the region. In a chapter entitled “Genocide”, Jenkins argues that the Armenian genocide was actually a Muslim jihad to wipe out all Christians in the Ottoman empire. His evidence? An American film from 1919 entitled Ravished Armenia that portrayed Turks crucifying Armenian women. The genocide was horrific enough without it being sensationalized with religious rhetoric. Moreover, Jenkins argues that together with the Greco-Turkish population transfers that followed the war, “this ‘great simplification’ created the world we know today, in which a mainly Muslim Middle East stands against a Europe defined by its Christian heritage – and a Christianity that scarcely acknowledges  its Middle Eastern dimension.”

Jenkins is also unashamedly pro-Catholic which leads him into some very tenuous territory. He portrays Pope Benedict XV’s repeated attempts at bringing peace to Europe as having laid the foundations of the European Union, and uses the fact that the original EU flag resembles the twelve stars and blue background on many icons of the Virgin Mary as evidence. “Not surprisingly, given its secular coloring,” Jenkins writes, “the modern-day EU strives to dismiss the Marian connection as an embarrassing myth, but the iconographic evidence leaves no doubt of the original intention.” Here and in many other parts of the book Jenkins draws sweeping conclusions that go far beyond the available evidence. While arguing that “throughout the war years … the political actions of Pope Pius XII were honorable and often heroic”, he explains the failure of the man sometimes referred to as “Hitler’s Pope” to condemn Nazism and the Holocaust as a result of the papacy’s fear of a second atheist dictatorship. According to Jenkins, the papacy was so horrified at how effectively the Bolsheviks destroyed the Orthodox Church in Russia that they refused to take a stand against Hitler in case the Nazis engaged in a similar policy against the Catholics. Jenkins has a lot of interesting stories and information in this book, but his arguments are much bigger than the evidence allows and are often based more on his own inclinations than on solid facts. This failure makes what could have been a valuable contribution to the extensive literature on the First World War into yet another example of sensationalist pop-history distorting the past in order to sell a few more copies.