“All the believers were one in heart and mind. No one claimed that any of their possessions was their own, but they shared everything they had.” – Acts 4:32

Churches are fascinating things because it’s never really clear who owns them. People give churches their land, money, labour, and time, and in return they feel a sense of ownership of them. Ownership isn’t always as certain as one might like, though. In big, institutional churches, a Bishop or Cardinal might dispose of property on a whim that took a local congregation decades, or even centuries, to put together. In smaller churches a charismatic, authoritarian pastor might unilaterally take control of a ministry and use its material resources for goals that aren’t shared by the people who donated their money and tears to build it up. On the other hand, people who give large sums of money to churches often end up having a disproportionate influence on what happens there; however good s/he is, there are few pastors who would risk alienating the people they rely on for their bread and butter. In Power and Patronage in Early Medieval Italy (2007), Marios Costambeys examines claims to ownership involving the Abbey of Farfa in eighth and ninth century Sabina.

This book is not about spirituality or Church life, but the Abbey dominates Costambeys’ story because the best sources he has to reconstruct local and regional politics or social relations are a collection of charters and legal documents that a monk named Gregory of Catino found in Farfa’s archives between 1092 and 1099 and incorporated into his institutional histories, the Regestum Farfense and the Chronicon Farfense. Gregory’s job was to write a book that would prove that Farfa legally owned the lands it administered. Costambeys extracts the charters from Gregory’s books and uses them to tell us about what life was like for people in Italy at a time when the influence of Byzantine law was fading, when the popes were beginning to assert themselves as secular rulers, and Frankish emperors gradually displaced the Lombards as the dominant force on the Italian peninsula. This is a time of massive change, and Costembeys assures us that nothing was as it seemed. We are used to thinking of dukes as having been people with authority, for example, but Costembeys points out that not only did the dukes constantly have to take people to court, but they don’t seem to have had complete control over their functionaries – gastalds and sculdahes – who administered local matters as they saw fit. Why would dukes have done this if they had had the power to unilaterally make decisions about everything that happened in their realms? 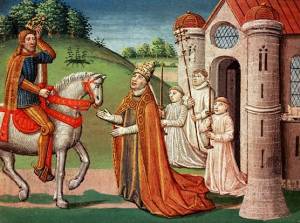 Farfa was a Benedictine abbey, but Costembeys reminds us that “we cannot simply assume that [an abbot’s] control over the abbey’s affairs was all that the Regula Benedicti said it should be.” Whether monks obeyed their abbot depended on the abbot’s personality, but also on his political connections. A large number of the monks came from local families, and they represented their family’s interests inside the abbey. Most of the abbots, on the other hand, came from outside of Sabina, usually from the north. Historians have often called these abbots “Franks”, because they arrived at Farfa at roughly the same time that Charlemagne conquered northern and central Italy. This might look like a Frankish infiltration of Sabinian monasticism, preparing the region for the introduction of Frankish rule and law. But Costembeys shows that actually most of these abbots didn’t identify as Franks as all, and what really mattered was an individual abbot’s connections with other rulers, many of whom were Franks, because those rulers could defend the abbey’s interests against the pope, who was constantly trying to appropriate Farfa’s landholdings for himself.

The abbey was intimately connected to the local community not only because most of the monks came from local families, but also because the abbey guaranteed property transactions in a period of widespread uncertainty. Property disputes show that not even dukes always had the potestas (“the power to act and to control”) to justify their claims to land, and that there was a frequent disjunction between the public office that a duke was supposed to fill and the personal power that accompanied it. The church did have that power though. Costembeys emphasizes that our modern ideas about “public” and “private” didn’t apply in early medieval Italy, and nor were people negotiating their power vis-a-vis something called a “state”. Instead, owning property gave you certain legal rights that included making decisions about who else could own property. In this world, where land ownership had political implications beyond the fact that a landowner could or couldn’t feed his or her family, Costembeys argues that the abbey of Farfa “came to be a repository and defender of bundles of local interests, interests that rarely attached to one individual, but were collective, especially when defined in contrast to other groups.” When push came to shove, being connected to a monastery as a patron or as a family member of one of the monks could mean the difference between keeping your land or losing it. Moreover, because no-one really “owns” church property, one could donate one’s land to the abbey in a variety of ways. People without children made the abbey into their heir on the condition that they could continue to work the land for the rest of their lives, and occasionally asked the abbey to promise to feed and clothe them in times of sickness.

Individuals, both important people seeking to consolidate their potestas and small landowners worried about inheritance issues, intermingled their “private” interests with those of the abbey. The church could then use its substantial influence in their favour during a land dispute or provide shelter during a Saracen invasion, which was a real threat. These sorts of relationships disappear from the sources once Carolingian authority in the region became more established and claims to property ownership could be made in other ways. The beauty of Costembeys’ book is his ability to show us, through extensive research and meticulous attention to detail, how the ambiguities associated with church property allowed one monastery to expand and become a valuable political and social resource in a time of upheaval and uncertainty.