Emily B. Baran. Dissent on the Margins: How Soviet Jehovah’s Witnesses Defied Communism and Lived to Preach about It. Oxford: Oxford University Press, 2014. 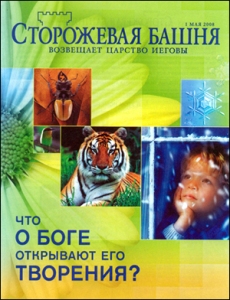 There is something deeply satisfying about stories of people stubbornly defying a repressive regime that denies them basic religious freedoms. In this fascinating history of Jehovah’s Witnesses in the Soviet Union, Emily Baran gives countless little vingettes of poor, working class people who believed Charles Taze Russell’s predictions about the end times so strongly that they were willing to suffer losing their jobs and their families, imprisonment, and exile in order to remain loyal to Jehovah’s message. Jehovah’s Witnesses made little headway in the Soviet Union during the interwar period, but spread in large numbers in Poland and Romania. When the eastern territories of these countries were incorporated into the Soviet Union after the Second World War, this meant that the communists suddenly had to deal with large numbers of Witnesses who wanted to knock on their doors and tell them about Jehovah. To the shock and horror of the Russians, Witnesses stubbornly kept preaching despite the regime’s attempts to prevent baptisms, confiscate literature, and arrest preachers. Eventually the communists had enough, and on July 6, 1949, they exiled 34,000 Witnesses from Moldavia to Siberia. Many more followed over the next couple of years. Despite the “extremely difficult” conditions of exile, parents told their children that this was part of Jehovah’s plan “so that people in far-off Siberia would hear the truth.” In the words of The Watchtower, “the government has paid their fare to new territories to preach the Kingdom message.”

Witnessing in the Soviet Union was very dangerous, but it happened nonetheless. Baran tells of one Witness who kept meeting with and giving literature to a lady she worked with even after she discovered that this woman’s husband was a communist official. Another Witness worked as a bus driver and preached on his bus routes. Another spoke to his fellow patients while in hospital. Witnesses joined seasonal labor brigades in large numbers and used them to network with each other as well as preaching to their fellow workers. With large numbers of Witnesses in prison, this was an obvious place to share the message. A 1957 Witness publication estimated that “of all that are known to be in the truth today in Russia it is concluded that forty percent have received the truth in prison and in camps.” Baran tells one story of an interrogator who tried to persuade his prisoner that Jehovah must be weak because He had not saved him from arrest. “Would you have talked to me about Jehovah if I came up to you on the street?” the prisoner asked. “Of course not,” the man replied. “… And that is exactly why I am in prison, so that I can speak freely to you about God!”

Soviet officials tried attacking Witnesses through their children, but the children just fought back. Students would sit through entire movies their teachers tried to show them with their eyes shut. refused to join youth organizations because “the Pioneers do not recognize God,” and one boy openly said to his class that “in order not to be influenced by Satan, I read only the Bible. I do not read any other books. I do not go to the movies. I do not watch television, and I sing only Christian songs.” When these children came of age they preferred to go to prison than to join the army. When it was time to vote, they either avoided voting altogether or they wrote “I vote for Jehovah” on the ballot. One of the most entertaining sections of the book is Baran’s chapter on Soviet attempts to convert Witnesses by preaching at them. It quickly became apparent that most atheist agitators didn’t know what they were talking about, and expected arguments that dead bodies decompose to convince Witnesses not to believe in life after death. Apparently they had never heard that believers receive new bodies at the resurrection! Witnesses responded by attending lectures on atheism and – at great personal risk – asking the speaker questions s/he could not answer, such as “what is a law of nature?” or “can there be a law without a lawgiver?” According to a Soviet article, whereas Witnesses usually made sixty visits to someone before they were converted, atheist agitators gave up after only five or six visits. 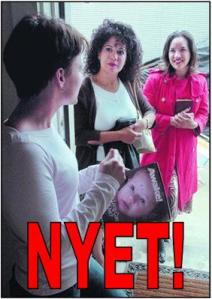 Baran isn’t writing a hagiography of Witnesses, and she frequently gives details about families split apart when the children abandoned their faith, or people who lied in order to avoid arrest. But the story she tells is overwhelmingly one about dissent in the face of brutal persecution. When the Soviet regime eventually decided to register Jehovah’s Witnesses as an official sect, the Witnesses refused unless the regime would allow them to knock on people’s doors and to avoid military service. Whereas their refusal to accept blood transfusions has caused problems between Witnesses and the state in countless countries, this was rarely an issue in the Soviet Union because the communists just gave patients transfusions by force, without asking their permission. Things improved somewhat after the fall of the Soviet Union in 1991, but still Russian society was overwhelmingly hostile towards Witnesses and slandered them in the press. The Russian Constitution of 1993 said that conscientious objectors have the right to do “alternative civil service” instead of joining the army, but no law made this actually possible until 2004 and in the meantime Witnesses were still being sent to prison for avoiding military service. Similarly, in Ukraine the government recognized Jehovah’s Witnesses as a religion, but then published textbooks claiming that they – like Satanists, Scientologists, and Mormons – were “banned” because of their “aggressive” and “light hypnotic methods.” Communist regime or not, it seems that throughout the former Soviet Union people still don’t like people knocking on their doors.

One thought on “Soviet Witnesses”

Leave a Reply to Bijbelvorsers x