This little Bible adds a whole new meaning to the phrase “taking a book to bed.” You not only want to take this book to bed, you want to snuggle with it all night long. The cover is fluffy and soft, and your kids will fall in love with it even before they read it, maybe even before they drool on it or eat it. This is also one of the first children’s Bible’s I’ve seen that is actually appropriate for toddlers and preschoolers. The text on each page is minimal, and is limited to short poems riffing on each story rather than to futile attempts to retell the stories better than the original authors. Sometimes the rhyme is forced or jilted, but by and large it works. Most importantly, the book is short enough to read easily in one sitting without testing young attention spans. I particularly like Sally Lloyd-Jones’ way of presenting the Bible because the poems won’t make sense unless the child knows the story already, so  it forces you to talk about the stories with the child yourself instead of letting the book do the talking for you. Tiny Bear appears on each page, but doesn’t try to enter into the story. He does his own thing; Tiny Bear playing with a toy boat is juxtaposed with Noah on the ark, Tiny Bear reaches for a doll on a high shelf as Goliath comes crashing to the ground, and he sleeps with his pussy cat while learning about Daniel spending the night with lions. Tiny Bear enters into conversation with the narrator, and at the end of each poem he is told “Yes, Tiny Bear, God made us too!” or “And God keeps us safe – yes, He does, Tiny Bear: Wherever we go, He will always be there.” 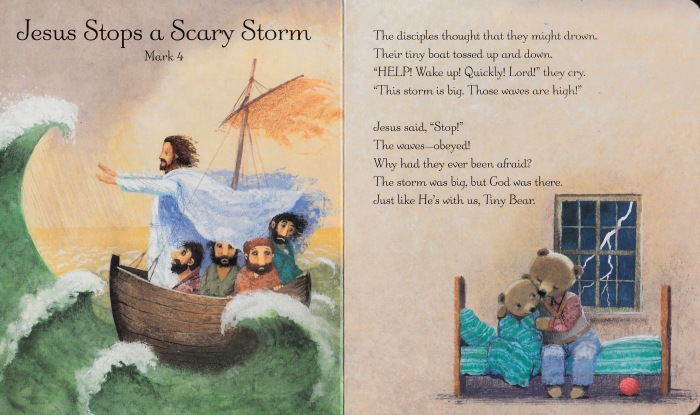 Igor Oleynikov’s illustrations bring the book to life. There is dynamism in almost every picture, giving the impression that things are happening in the Bible – this isn’t a frozen world of placid characters with no personalities. Baby Moses reaches out of his bed of reeds to play with a baby bird, and Daniel tickles a lion under his chin while the angel is protecting him. Interloping animals add interest to the stories, such as three birds who sit with the crowd listening to the sermon on the Mount or the fox who watches the risen Jesus greet Mary outside His tomb. Most of Oleynikov’s characters look Middle Eastern, although his Jesus consistently comes out as a white man, which is annoying to say the least. The fact that the book comes in boys and girls versions (blue and pink respectively) is equally cringe worthy, and detracts from the otherwise wonderful messages that it sends to young children.

I would like to thank BookLook Bloggers for providing me with a review copy of Tiny Bear’s Bible.