Having written for years about religious violence, this book makes me feel kind of silly. In order to prove that religion caused violence, William Cavanaugh points out, “one would first need a concept of religion that would be at least theoretically separable from other institutional forces over the course of history.” Of course, none exists. The concept of religion as a social category distinct from politics, economics, or knitting, emerged in Western Europe during the eighteenth century as Enlightenment thinkers struggled to wrest control over the hearts and minds of Europeans away from the church and to put Reason and the secular state in its place. Religious Studies scholars have recognized that religion as a transhistorical and transcultural category is a Western construct since Wilfred Cantwell Smith’s The Meaning and End of Religion (1962), but this has not stopped them pontificating about the violent tendencies of certain religions. The idea that religious people are somehow crazy and prone to uncontrollable violence is a very convenient one, and today it justifies state violence against religious fundamentalists from Al Qaeda to Jewish settlers. 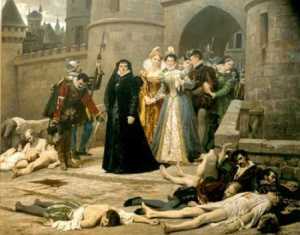 The story goes that Europeans became so divided over religious debates in the wake of the Reformation that in order to stop further bloodshed they separated church from state. No longer at the mercy of religious fanatics, the secular state was then entrusted with keeping the peace by preventing religious controversies from turning violent. William Cavanaugh takes this narrative apart piece by piece in The Myth of Religious Violence (2009). He argues that “the standard narrative says that the modern state identified religion as the root of the problem and separated it from politics. However, there was no separation of religion and politics. What we see in reality is what John Bossy describes as a “migration of the holy” from the church to the state. Ostensibly, the holy was separated from politics for the sake of peace; in reality, the emerging state appropriated the holy to become itself a new kind of religion.”

In chapter one, Cavanaugh analyzes the work of nine scholars who argue that religion is particularly prone to violence, showing how none of their approaches to the question stand up to critical scrutiny. This makes very, very tedious reading but makes his point that the idea is untenable. In chapter two he reconstructs how the concept of “religion” evolved in the modern West, showing that in the ancient world religio referred to practices that produced sanctity and that medieval Christians understood it as something akin to piety. The idea that religio referred to the supernatural (as opposed to the profane) only became popular in the seventeenth century, and even then it is a concept specific to the West. The rest of the world sees little reason to distinguish between the religious and the secular as if they were two separate spheres of life. Cavanaugh’s conclusion is that “the attempt to say that there is a transhistorical and transcultural concept of religion that is separable from secular phenomena is itself part of a particular configuration of power, that of the modern, liberal nation-state as it developed in the West. In this context, religion is constructed as transhistorical, transcultural, essentially interior, and essentially distinct from public, secular rationality. To construe Christianity as a religion, therefore, helps to separate loyalty to God from one’s public loyalty to the nation-state. The idea that religion has a tendency to cause violence – and is therefore to be removed from public power – is one type of this essentialist construction of religion.”

Cavanaugh devotes chapter three to debunking the popular myth that the wars of religion in seventeenth century Europe  were actually about religion. Once again I began to feel silly when reading this chapter, as I have taught a variation of this myth many times. He shows that during these wars Catholics fought Catholics, Protestants allied with Catholics against other Protestants, and that historians who specialize in the period are actually quite divided over how “religious” any of the quarrels behind the wars were. Having proved that (a) combatants did not form alliances on the basis of their religious beliefs, (b) religion was not the cause of the conflicts, and (c) early modern Europeans did not separate religion from politics anyway, he then demonstrates that (d) state-building was actually the cause of the wars, not the solution.

Lest anyone imagine that this is an abstract debate of interest only to historians and antiquarians, in chapter four Cavanaugh walks us through twentieth century debates over saluting the flag and religious schooling in the United States. American judges repeatedly referred to some artificial and analytically untenable distinction between the religious and the secular when they forced Jehovah’s Witnesses to salute the flag while providing public money to bus students to parochial schools. Unsurprisingly, he finishes the book with a short discussion of American discourse about Islamic fundamentalism, where Muslims are frequently painted as terrorists just because they have religious beliefs. Despite its obviously polemical nature this book makes some important points about how we teach history and about how we talk about religion in general. The Myth of Religious Violence should force us to rethink some of our most basic analytic approaches to religion and violence, paying more attention to configurations of power that legitimate certain discourses and marginalize others.