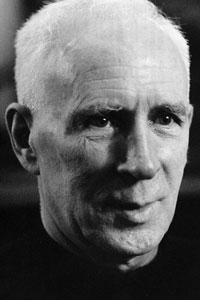 The face of the French Jesuit Henri de Lubac (1896-1991) stares at you from the heading of this review but despite the fact that de Lubac’s writings are discussed on every page, The Suspended Middle (2005) is really about the ideas of an English Anglo-Catholic named John Milbank. I encountered Milbank’s ideas in his Theology and Social Theory (1990) a little over ten years ago. My religious studies professor, a passionate atheist, castigated him for using a dirty, post-modern trick of undermining secular knowledge in order to put his own Christian truths in its place. I figured that anything which upset her that much must be worth reading. And it was. Milbank is a very complicated writer and I understood almost nothing of his first book, but I remember being deeply impressed by his vast erudition, the logical rigor of his thought, and his ability to bring difficult thinkers from across Christianity’s rich two thousand year history into fruitful conversation with one another. His writing has only improved since then.

Milbank is now the leading spokesperson for a fascinating and so far unexhausted theological current known as “Radical Orthodoxy.” Radical Orthodox theologians such as Milbank, Catherine Pickstock and Graham Ward reject the secular Aristotelianism that they argue has corrupted too much of Christian thinking since the time of Duns Scotus (1266-1308) and put in its place a neo-Platonic post-modernism that brings Gregory of Nyssa into dialogue with Jacques Derrida and critiques Gustavo Gutiérrez’s Hegelianism through Gilles Deleuze’s ontology of desire. In The Suspended Middle Milbank provides what is possibly the clearest and most accessible introduction to Radical Orthodoxy to date.

When de Lubac first published Surnaturel in 1946 it caused a major controversy among Catholic theologians because it claimed that the distinction between the natural and the supernatural was inaccurate. Milbank explains: ” the essential contrast, up until the High Middle Ages, remained one between natural and moral and not natural and supernatural. The former distinction though, de Lubac argued, itself reflected the authentically Christian sense of the notion of the supernatural. For on the one hand there was created nature; on the other there was created spirit, which was free, and intellectually reflexive (‘personal’). This ‘moral’ realm was in some sense not just created; it bore a more radical imprint of divinity; the imago dei.” (18). The implications of this are enormous. For Milbank, what matters most about de Lubac’s new understanding of “pure nature” is that it makes it impossible to divide the world into the sacred and the secular, and thereby completely undermines the possibility of a secular philosophy as a discipline separate from theology. Rejecting secularism as a legitimate philosophical position lies at the heart of Radical Orthodoxy’s agenda and for this reason Milbank finds in de Lubac an intellectual precursor to his own position.

The anthropology of Milbank’s de Lubac is one that is profoundly influenced by Eastern Orthodoxy and by the Greek patristic understanding of theosis (Godmanhood). Milbank writes that de Lubac sees “human nature as intrinsically raised above itself to the ‘super-nature’ of divinity,” such that there is no secular “end” or purpose for humanity outside of union with God (5). But de Lubac goes further than most Orthodox theologians in that he follows Origen to conclude that God will ultimately reconcile all of creation to Himself with no need for Hell. Milbank hints at de Lubac’s universalism in several places but he himself does not pursue it.

De Lubac’s “non-ontology,” as Milbank calls it, also has important theological implications, which become clear in de Lubac’s critique of the Thomism that dominated Catholic theology of his day. Milbank writes that the Thomists forgot “that God is esse itself, not an ens but the eminent reality of all entia. As such he never, properly speaking, interacts with creatures. But this fact has implications for the logic of the gift. We imagine that the gratuitous needs to be contrasted with the obligatory or the inherent; yet this only applies to the interactions between beings in the ontic realm. In the realm of the ontological difference, of the creative emergence of entia from esse, gratuity arises before necessity or obligation and does not even require this contrast in order to be comprehensible. The creature as creature is not the recipient of a gift, it is itself this gift. The same consideration applies to a spiritural creature: as spirit he does not receive a gift; he is this gift of spirit. … Since there is no preceding recipient, the spirit is a gift to a gift and the gift of giving oneself to oneself, which is the only way consciously to live being a gift and so to be spirit.” (43-44) Milbank has thus shifted God’s relationship with humanity, refusing to see God as an equal player in divine-human dialogue, but recognizing Him as the source, redeemer and end of all creation. Milbank’s conclusions are always striking and no matter how many reservations one might have about the potentially theocratic and authoritarian implications of his thought it is nonetheless refreshing for its audacity as much as for its erudition.

Leave a Reply to Amyclae x

Follow And the Words became Books on WordPress.com
Join 150 other followers