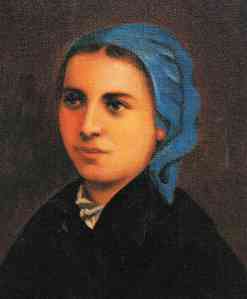 Bernadette Soubirous had her first vision on 11 February, 1858. She was fourteen years old. Bernadette first saw a light near a grotto, and met a child dressed in white. Bernadette had eighteen visions like this over the next few months. At times she would fall into a trance, and once, following instructions she had received in a vision, she miraculously turned the muddy pond into a clear water spring. Bernadette told her family that the village needed to build a chapel next to the spring, and the seventeenth time she met her, the girl in her visions revealed that she was “the Immaculate Conception.” It took a while for the Church to support Bernadette’s story, but as more and more people came to believe in her saintliness, pilgrims began flocking to Lourdes. Miraculous healings took place at the spring, and at the time of Bernadette’s death roughly 30,000 pilgrims were visiting the site each year. Today that figure is closer to 5 million. 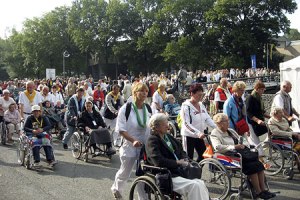 Thanks to the Medical Bureau the Church set up to test and prove the authenticity of the healings that take place there, Lourdes has frequently been the site of debates over whether miracles still happen in the modern world. Personally, I find the question of miracles boring, and even a little heretical. Not only can science be used to prove almost anything you want it to, but deciding that something is of God just because a scientist told you it is suggests that you are worshiping science, not God. Much more interesting are the sociological implications of the Lourdes phenomenon. What do the miracles and pilgrimages tell us about French society and Catholicism in the modern world? In the words of Ruth Harris, “Lourdes in these early decades is a story about France, about the struggles of Catholics in the aftermath of revolutionary turmoil, the capacity of the Second Empire to adjust to, and even profit from, religious movements, and the inability of the Third Republic to suppress them.” 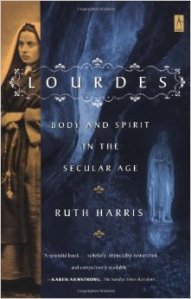 In Lourdes: Body and Spirit in the Secular Age (1999) Ruth Harris tells the story of Lourdes’ transformation into a pilgrimage center in great detail, providing valuable historical context. She introduces us to other girls and women who had similar visions almost immediately after Bernadette became famous. One sixteen year old girl, Joséphine Albino, even entered into rigid trances the same way Bernadette had, but in her visions the Virgin sometimes turned into a horrible monster who predicted frightening punishments on unbelievers. The general consensus was that her visions must have come from the devil because the true Virgin would never be so terrifying. The truth of Bernadette’s visions, on the other hand, was confirmed by her behavior, which remained modest, obedient, and blameless despite the temptations of wealth and the tremendous attention she received until she entered a convent at Nevers at the age of 22. When Harris turns her attention to the shrine itself, she tells it as a story of the Catholic propagandists Henri Lasserre and Père Cros, whose books brought Bernadette’s story to the world and framed it as proof of the truth of Christianity in the face of the Third Republic’s hostility towards the Church. 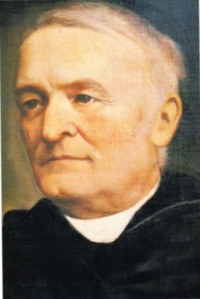 Pilgrimages sky-rocketed at Lourdes once Emmanuel d’Alzon, the founder of the Assumptionist order, established the Association of Our Lady of Salvation in 1872, a charity dedicated to promoting pilgrimages as a form of religious education. He cultivated female followers in particular, encouraging them to experience pilgrimage on a deeply emotional level. “Our Lord wants you more for himself every day,” he wrote to Mlle Chaudordy after she visited Lourdes. “There are delicate things in your soul that he wishes to penetrate completely. You have to open up wide to him and, when you are open, open yourself to him still further, because the divine Master has an insatiable need for your love and intimate sacrifices.” Among other things, Père d’Alzon’s language tells us a lot about how Catholic priests saw women, and how quickly they were to eroticize female religious experiences. Harris also puts Lourdes in the context of French political history, and notes how pilgrimages increased after France’s defeat in the Franco-Prussian war of 1870-71. Now people came to the shrine not just to pray for themselves, but for their nation as a whole. The number of sick people making the pilgrimage increased once the trains began traveling to Lourdes. The easier it was to make the journey, the more often people who were suffering physical pain decided to go. As stories of miraculous healings in the waters at Lourdes increased, so too did the skepticism of the scientific community, and new debates emerged around what was really happening here. Harris leaves us unsatisfied with both the doctors and the clergy who were fighting over the shrine, pointing out that neither group tried to understand the needs of the sick and the women who traveled there for healing and comfort. 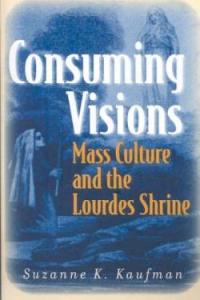 In Consuming Visions Mass Culture and the Lourdes Shrine (2005), Suzanne Kaufman tells quite a different story. Heavily influenced by Cultural Studies theorists, Kaufman is interested in how new technologies, media, and marketing shaped pilgrim’s experiences of the shrine. “Commercialization,” she writes, “was central to the development of the Lourdes pilgrimage site, to its success as an expression of popular religious faith, and to the century of tumultuous debate over worship at the shrine.” Kaufman focuses on the trains that took people to Lourdes, the postcards and trinkets they bought there, and the photos that they took home of their time at the shrine. Movie-makers even produced short films about pilgrimages to Lourdes and screened them all over the country. She notes how the Church tried to keep the secluded and quiet nature of the grotto while building an enormous cathedral next to it and filling the little town with fancy hotels and souvenir shops. In many ways it was the modernity and spectacular nature of Lourdes that made it special. She writes that “the train, in particular, was featured as an icon of the religious landscape. Several postcard series provided close-up views of the special trains designed to transport sick pilgrims to Lourdes.” 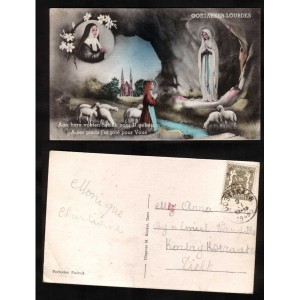 When Kaufman reads the postcards that people sent home about their time at Lourdes, she is shocked to find them talking more about what they bought than their religious experiences.  She comments that “pilgrims like Madame Rousseau,” whose postcard she reproduces, “felt no discomfort using this new medium to discuss shopping expeditions and sight-seeing along with sentiments of religious devotion. These activities, then, were an accepted part of the pilgrimage journey. Indeed, a few cards failed to mention the religious aspects of pilgrimage at all.” Even the doctors got involved in what Kaufman calls “scientific sensationalism.” The ways in which they examined patients before and after their visits to the shrine transformed what would otherwise have been a personal religious experience into a modern healing spectacle. Whereas at first pilgrims stayed with friends and relatives, after 1881 a hospital was built where sick pilgrims could be observed and studied in order to promote the special nature of the shrine. Finally, Kaufman studies the testimonies written by women who claimed to have been healed at Lourdes. As they told their stories, Kaufman says, “Women rewrote popular tales of miracles as up-to-date melodramas, casting themselves as protagonists in a battle for their lives.” Being healed at the shrine made people special and gave them a mini-celebrity status. Female pilgrims in particular cultivated this sort of attention and tried to give the priests the exciting stories they wanted.
Whereas Ruth Harris provides a straight-forward narrative of the growth of an important shrine, Suzanne Kaufman’s study is much more sophisticated and in many ways more memorable. Few readers will accept all of her interpretations, but Kaufman in particular has shed new light not only on Lourdes itself, but on the nature of religious experience in late nineteenth century France.